“This limited, numbered edition of Chang-rae Lee’s On Such a Full Sea will be available on January 7th, 2014. Riverhead art director Helen Yentus and members of the MakerBot team designed the slipcase, and 200 of them will be made with the MakerBot® Replicator® 2 Desktop 3D Printer with MakerBot PLA filament, a bioplastic made of corn, fabricated by MakerBot in Brooklyn, New York. Each copy is signed and numbered by the author.” From www.riverheadbooks.com  Is this the first 3D-printed slipcase?  Yea or nay, this effort is clever.  As the book slips from its case, the words of the title on the slipcase are completed. The design will surely make purchasers give “pride of space” to this book on their bookshelves and renewed sense to the word “outstanding”.

Additional cover design and art direction by Helen Yentus can be viewed here.

What do Chip Kidd and Hans Holbein have in common? 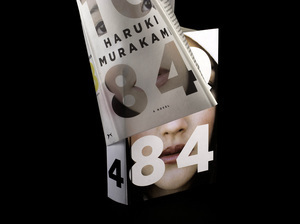 For the past 25 years, Chip Kidd has made a name for himself as a top book designer. His designs have helped transform books into visual icons.

With the disappearance of the dustjacket’s original function — to protect the binding of the book — is it imaginable that the book cover will no longer be needed as the book evolves?

Imaginable, yes.  Likely, no.  As long as the imagination of Chip Kidd and his like bring their passion to publishing.

The possiblility of building up the thumbnail cover across the pages/screens of the ebook or giving it a functional role in the narrative may mean we come to judge a cover by its book!